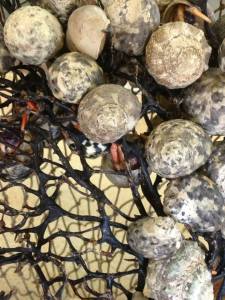 Much like a hermit crab I have spent my life living in a shell and as time rolled by I would exchange it for larger and larger shells. It was my home, it was my comfort and protection. And with it I was able, for the most part, to hide in plain sight.

You see, the majority of my life I have been morbidly obese. You would think the larger you are the more people see you but the opposite is true. The larger you are the LESS people see you….let me rephrase that…..the less people WANT to see you. They turn away in stores and elevators as if they are embarrassed for you and rarely speak. It’s a silence you just become accustomed to over time. It’s normal, not being noticed or being glanced over and passed. The silence itself becomes a layer of comfort.

In December 2012 I shattered my silence by undergoing full gastric by-pass. The weight began to fall away at a steady pass. But let’s face it, when you weigh 320lbs it takes a while for people to notice. So I was able to hide in my shell for a good while longer. It wasn’t until I had lost nearly 80lbs that the change began and my silence was broken.

I was alone on a hotel elevator having been at a business meeting or something. I honestly can’t remember because it was what happened next that is so solidly burned into my memory. The elevator “dinged”, the doors slid open and several business professional got on. I looked up at them and their gaze met mine and suddenly I realized they were addressing me. “Hi, How are you today?” a gentleman asked…….I stammered, “just fine” , as I backed my ass waaaaaaay into the back corner of the elevator. All the while the voice inside my head screamed, “Holy shit! They can see me!”. Panic set in immediately. No I mean REAL PANIC….as in a PANIC ATTACK.

I bolted out of the elevator when it reached the lobby and headed to the valet. I passed off my ticket to the young man who ran for my car and I stood there…out in the open…..waiting for my car. I might as well have been standing there butt-ass-naked with a spot light shining down on me because THAT is how exposed I felt in that moment.

I had to have a good, long discussion with myself when I got home that night. I could choose to hide at home and hold down my couch or I could push myself out the door and join the party. I felt like the hermit crab, soft and vulnerable inside. But the choice wasn’t to shed one shell for another like Hermie the Crab. It was time to accept the fact that I had a life changing surgery for a reason….to live. And the only reason to live is to be SEEN and HEARD.

So cheers, to “LIVING OUT LOUD”.

I love each and every one of you
Juliana

14 comments on “Hiding in plain sight….”