Pull your head out….. 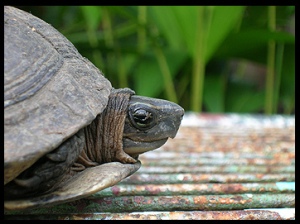 There comes a time in life when just putting on your big girl panties isn’t enough armor to get you through the crisis. I know.  It is hard to imagine.

In those rare instances I become….the turtle. I pull in my short, stubby little front hands badly in need of a manicure. I tuck in my chubby little back legs and pull my knobby head in tight…and WA LA! I am invisible and protected inside a  dark, stylishly minimalistic, yet cramped shell.

Well…it works for a while. Silence. Solitude. Eventually I got lonely and sent up a few flares to a select few and said “Wanna come over?”…It’s safer for me here.  Come on! ….come over!…I’ll make room!!!  But I get no takers because they can see that it’s a tight squeeze for one, much less a table for two, and the odds that I had bathed were slim to none. But I stay there. In the silence….solitude….scared, till the festering funk that is my confines becomes too toxic to live in.

I stuck my head out today…and there was light…and fresh air…and room to stretch my legs. Oddly enough….no one attacked. It felt good.

there had come a point where I  changed my focus from “ME” on the inside to “THEM” on the outside…and I could only talk to THEM – OUT THERE. I found that some people’s crisis were still going on. Some just needed a pat on the back.  Some were just waiting on a clean pair of Big GIRL PANTIES and some were waiting for major reinforcements. I couldn’t contribute to anyone as long as all I saw was the inside of my own shell. So today, I outgrew my shell.

My Father died 11 days ago. I FEARED feeling too much. I FEARED not feeling enough. I found out that what I felt was just right and that the only one keeping score…was me.

I love each and every one of you